Recipients of the Tom and Bruce Shinn fund have conducted research on a wide array of native plant related topics. Since 2013, over 30 undergraduate and graduate students from eight universities across the state have received funds for their research projects. Their studies have taken them to remote rocky outcrops and cliff faces, rugged mountain terrain, piedmont forests and prairies, open salt marshes, swamps, and marshy coastal plains. Steamy summer days, pesky insects, long hours, and heavy backpacks have not deterred their enthusiasm for research. Results of their studies have furthered our knowledge of North Carolina’s native flora. 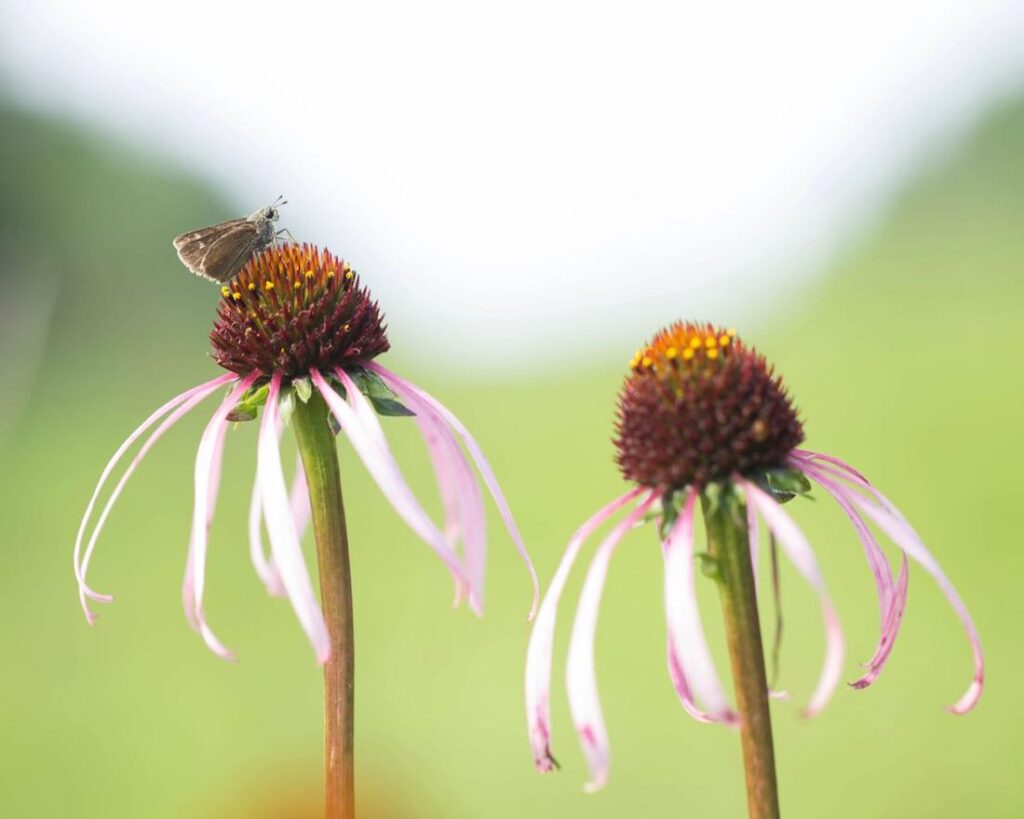 Protecting Gray’s Lily
Ben Brewer is investigating the beautiful Gray’s Lily (Lilium grayi), found in the Southern Appalachians of North Carolina and neighboring states. Gray’s Lily is susceptible to Lily Leaf Spot, and Ben will use extensive field surveys, especially of the large population at Tater Hill Plant Preserve, to monitor fungal disease and collect flower and fruit number. Gray’s Lily also faces genetic degradation through hybridization with the more common Canada Lily (L. canadense). Using molecular markers and over 300 individual plants, Ben will determine the population structure of Gray’s Lily and the extent to which hybridization threatens the survival of the species. 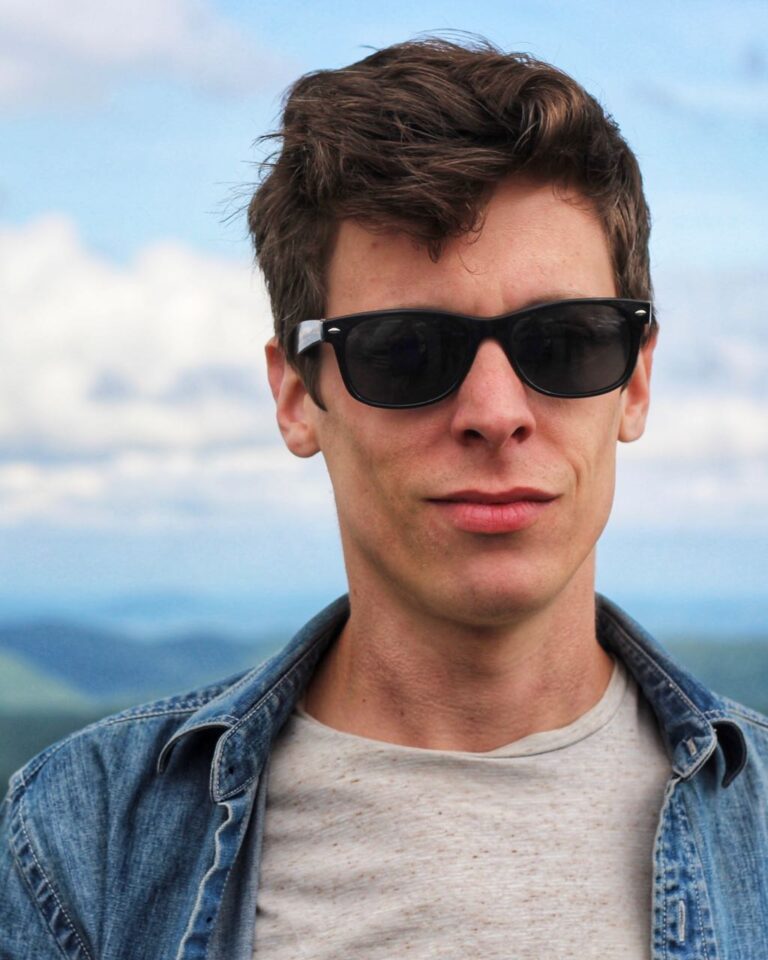 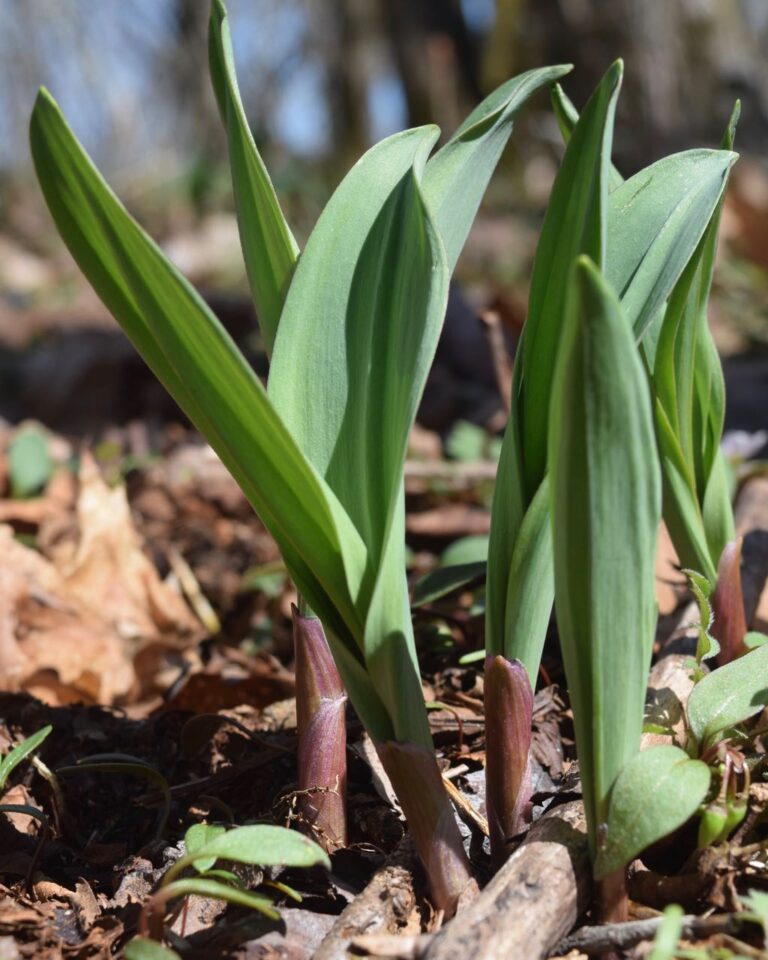 Potential of Princess Tree to Replace Tulip Poplar
Tulip Poplar (Liriodendron tulipifera) is a familiar member of plant communities throughout the Southeast. Noticing that the aggressively invasive Princess Tree (Paulownia tomentosa) is ecologically similar to Tulip Poplar, Hannah Dinkins decided to study the potential of the Princess Tree to replace it in Southern Appalachians forest communities. To do this, she will use seedlings in burned and unburned research plots across natural light gradients. After the first year, she will measure multiple parameters, such as water use, photosynthetic rates, and biomass, to compare the two species. 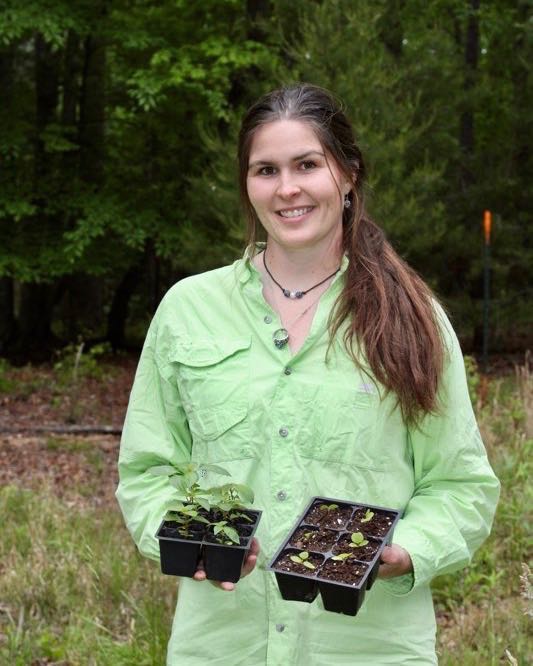 Pollinators found on High-elevation Rocky Outcrops
Carson Ellis is interested in the pollination of plant communities on remote high-elevation outcrops in the Southern Appalachians. These resource limited and isolated habitats, sparsely distributed and exposed to harsh weather conditions, present challenges to pollinators and researchers alike. Carson will monitor these plant communities over time, collecting data related to pollination in order to assemble a floral visitation network. To strengthen the network connections, he will also analyze the pollen grains of captured pollinators. Understanding pollinator and plant assemblages of these rare outcrops, which often harbor endemic and imperiled plants, will be critical information in protecting these fragile habitats. 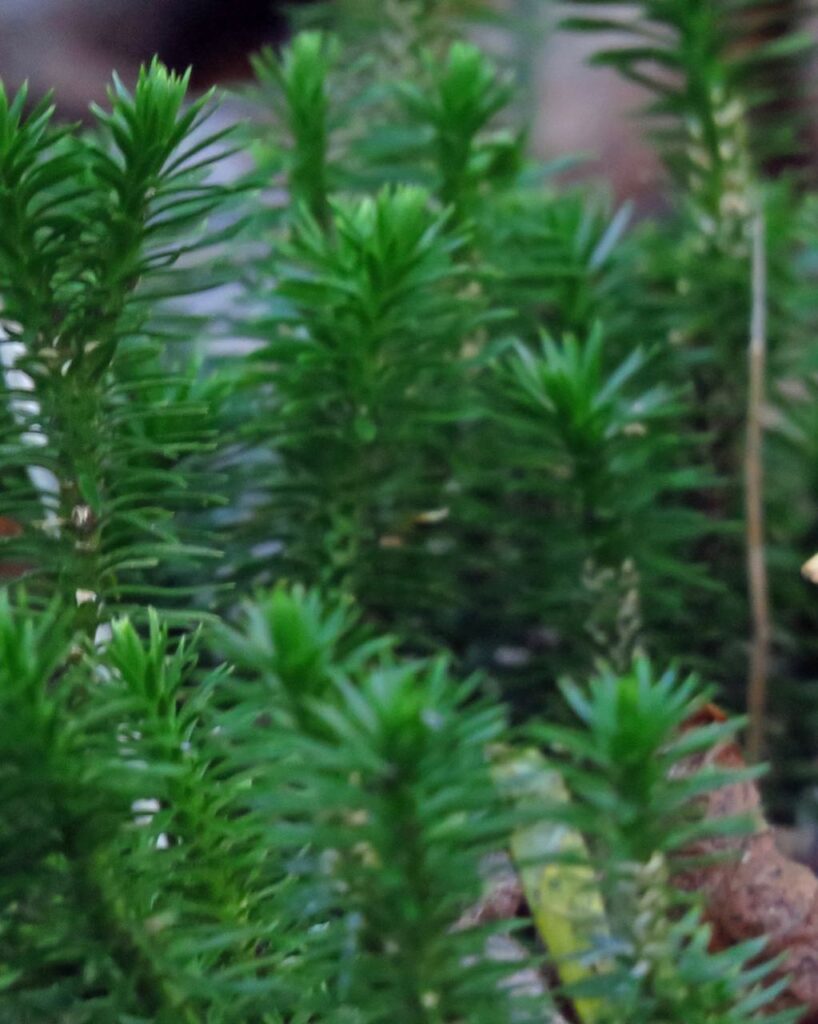 Hidden Secrets of Shining Clubmoss
Shining Clubmoss (Huperzia lucidula) is found in moist coniferous and mixed hardwood forests throughout North Carolina and may arbor a compound useful in the treatment of Alzheimer’s disease. Secondary metabolites have already been isolated from its Asian relative, Toothed Clubmoss, and are being used medicinally, leading to a decline in natural populations. Currently, neither clubmoss can be propagated in nurseries. Before interest in Shining Clubmoss here in North Carolina leads to overharvesting, Vanessa Gremler is keen to discover whether or not it harbors endophytic fungi that produce the medically relevant secondary metabolites. She is also interested in isolating the symbiotic endophytic fungi that live with Shining Clubmoss, as knowledge may allow others to propagate it in nursery settings.

Vanessa Gremler, Appalachian State University
Analysis of AChE Inhibitors in Huperzia lucidula endophytes. Advisor: Dr. Annkatrin Rose
Who Pollinates Venus Flytraps?
The Venus Flytrap (Dionaea muscipula) is one of the most charismatic plant species in the South, yet there has been only limited work on its pollination ecology, critical information in protecting the species. Laura Hamon is continuing her fieldwork she began in 2018 to document the various species that visit Venus Flytraps and empirically show which is the most efficient pollinator of the species. She will also focus on seed set and assess the effects of supplemental prey (ie feeding them crickets) and/or pollen on seed numbers. 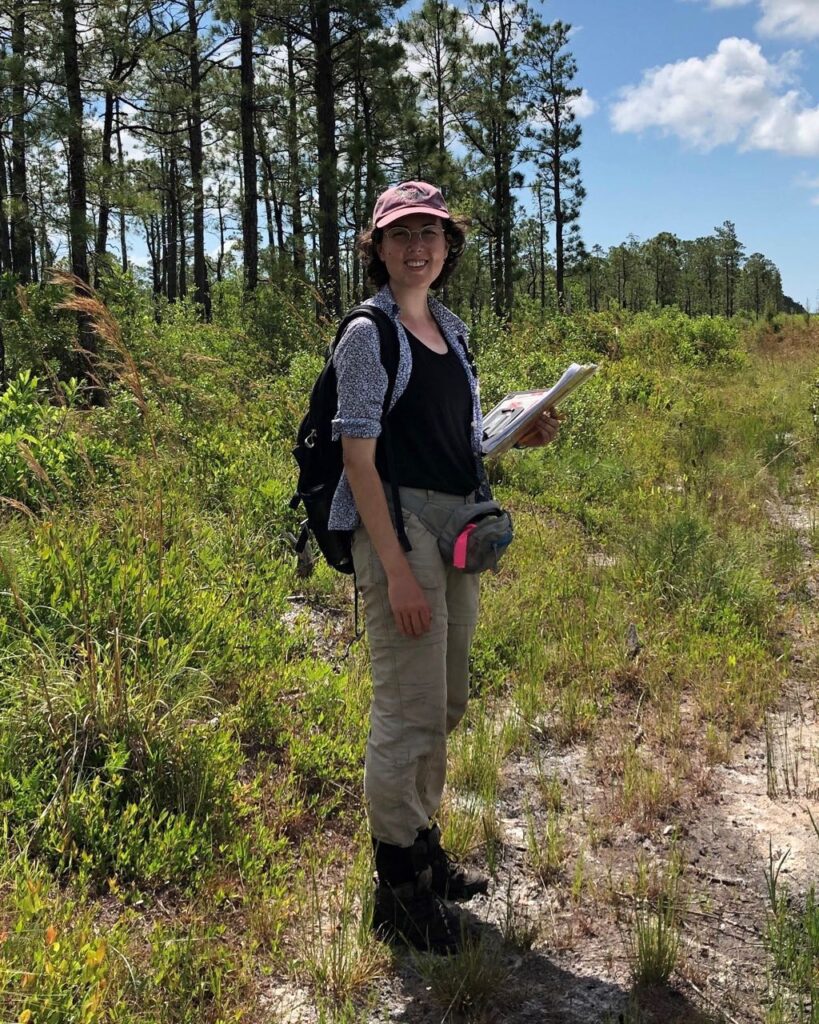 Rare Pitcher Plants and their Associated Flies
Peter Kann studies the relationship between well-known pitcher plants (Sarracenia) and the flies (Fletcherimyia) that use them as host plants. These flies feed on the pitcher plant’s captured prey, not on plant tissue. Peter will determine which species of Fletcherimyia are associated with two rare, endangered pitcher plants, S. jonesii and S. oreophila. 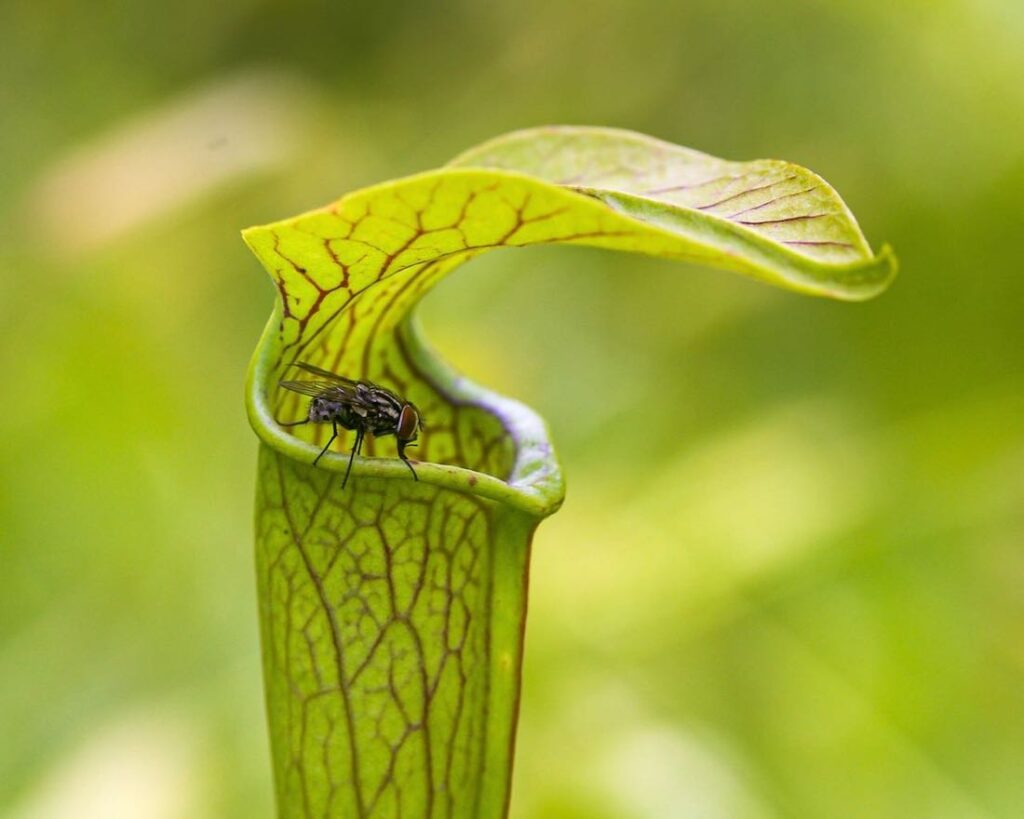 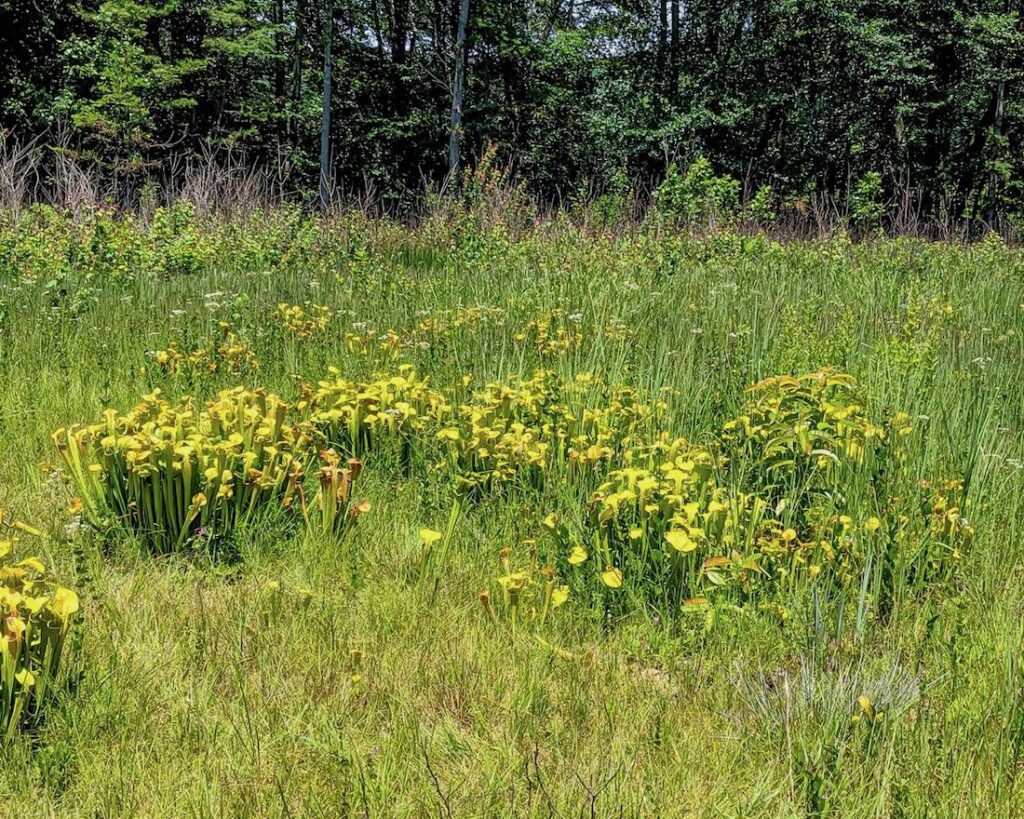 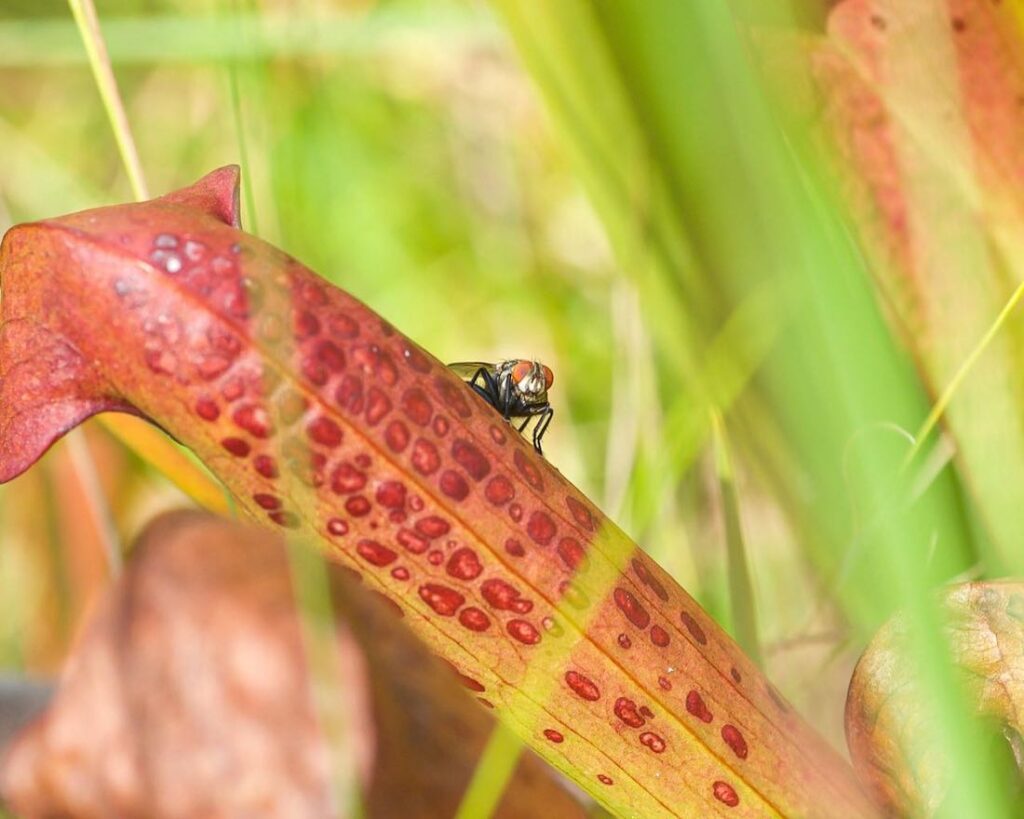 Stressful Living on Mountain Out-crops
Ryan O’Connell is studying factors that could negatively impact populations of the imperiled Mountain Golden Heather (Hudsonia montana), which is found in only a few locations in the North Carolina mountains. Because plants often experience more than one environmental stressor at a time, Ryan will examine both soil moisture levels and invasive species abundance simultaneously and separately in monitored plots. He will then measure survival, growth, and seed set of the Mountain Golden Heather and use the collected data to model predicted population changes. 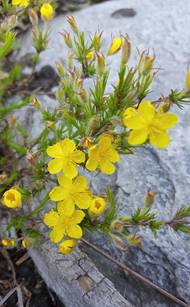 Bluff Mountain Lichen Community
Bubba Pfeffer plans to study the often overlooked but highly diverse lichen community. His study site is Bluff Mountain, an area known to harbor several rare plant communities, where he will sample lichens in all forest types and on rock outcrops. Because lichens are composite organisms composed of one or multiple species of fungi and algae or cyanobacteria, Bubba will not simply catalogue the species but also document a more functional aspect of the intricate interactions and assemblages that compose the different lichen communities. 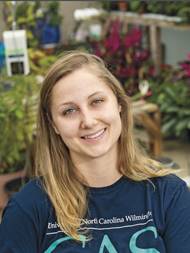 Genetic diversity of the Endangered Rough-leaved Yellow Loose-strife
Lysimachia asperulifolia (Rough-leaved Yellow Loose-strife), found only in the coastal plain of North and South Carolina, is an endangered species. Jessica Roach’s research will focus on documenting the genetic diversity within nine known populations. The rhizomatous species appears to reproduce sexually at a low rate, so it is vital to understand how clonal the remaining populations are. Her data will contribute to the management and protection of the species. 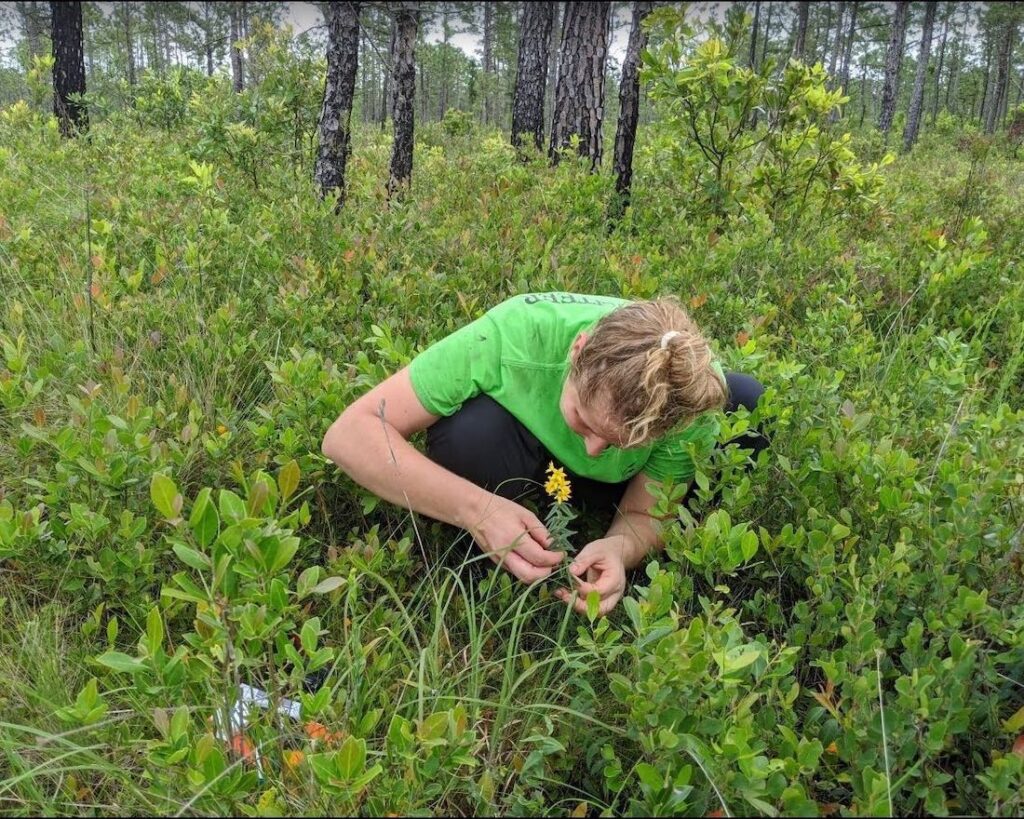 Grassland Competition under Simulated Climate Change Conditions
Anita Simha will study climate change impacts on native and non-native grasses. Her research will explore how shifts in the timing of germination and flowering could favor one species over the other. Using an abandoned field, she will simulate early germination of three grassland species in different combinations and document how the competitive dominance of the grasses changes depending on which species germinates first. Because our warming planet can have unforeseen effects on the make-up of plant communities, studies such as Anita’s will be valuable information for future conservation efforts. Anita will also use her research field site as an educational tool for one-day STEM summer camps for Durham Public School students.

Rock Climbing Routes and Sensitive Cliff Face Vegetation
Cliff systems can harbor unique, diverse plant communities, such as glacial relicts and endangered biota, and are dominated by stress-tolerant, often cryptic lichens, bryophytes, and vascular plants. Rock climbing is a major source of human disturbance to cliff ecosystems, but this effect is highly variable due to the unevenness of the rock surface. Preferred rock climbing routes could overlap with specific vegetation communities with detrimental impacts. Georgia Harrison quantified these impacts by conducting vegetation surveys of climbed and unclimbed cliff faces in the Linville Gorge Wilderness Area. She also created detailed fine mapping of cliff face topography, which she used to show how rock climbing routes could be disrupting ecological succession in lichen communities. 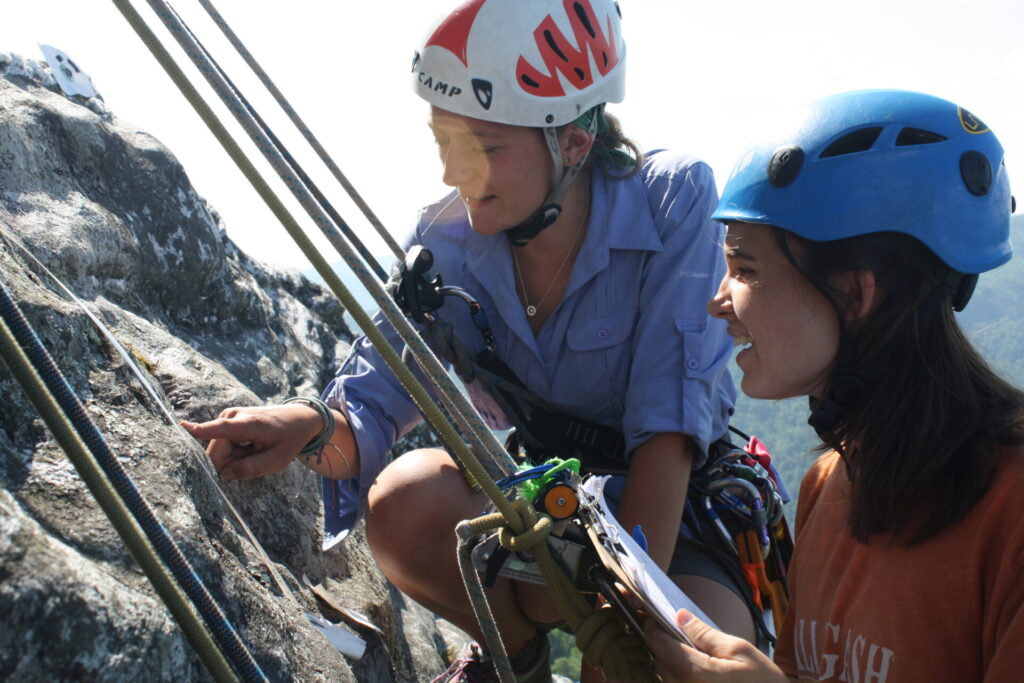 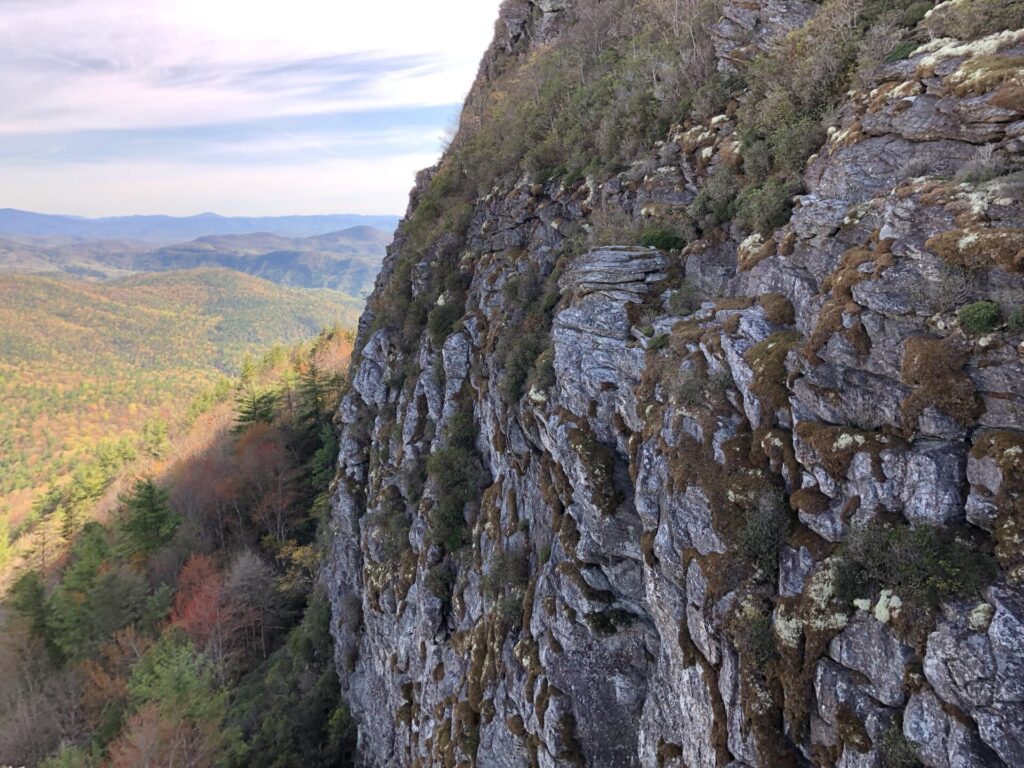 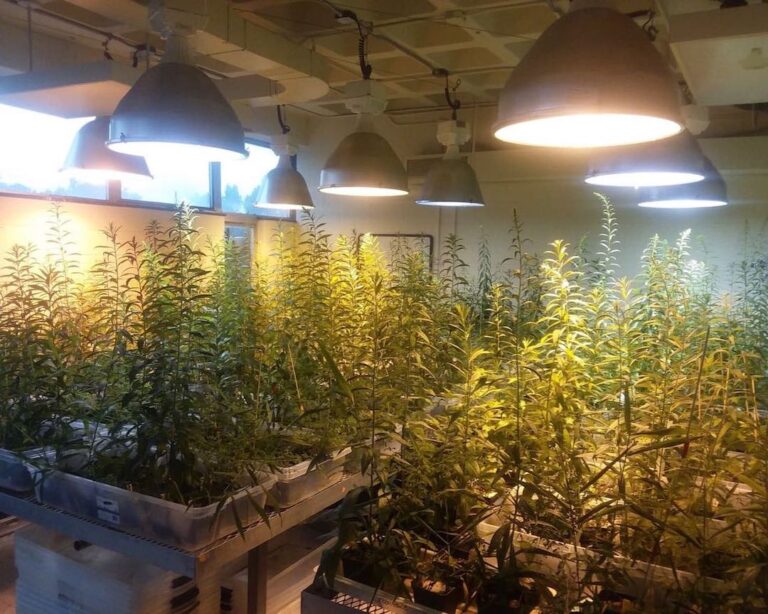 How to control for Chinese Lespedeza when it is helping more Chinese Lespedeza grow
Invasive species are a threat to biodiversity and can be very difficult to control. Sometimes using herbicidal sprays are the only practical solution, although with negative consequences to the native flora. And while we are busy plotting above ground how to rid these aggressive exotics from our gardens and natural areas, below ground some invasives are busy changing the soil environment to their benefit. Matthew Hodges studied both of these issues using the invasive Chinese Lespedeza (Lespedeza cuneata) and three native species. Lespedeza formed more root nodules and grew to a larger size in soils previously occupied by Lespedeza, as opposed to soils not previously used by Lespedeza, indicating that the plant does alter the soil property in its favor. Matthew also found the native seedbank was less diverse and bountiful in sprayed soils, signaling that restoration efforts could be more successful by augmenting an area with native flora rather than simply relying on the seedbank. From his work, he also identified possible contenders for use in restoration post-removal of Lespedeza, such as Solidago altissima. 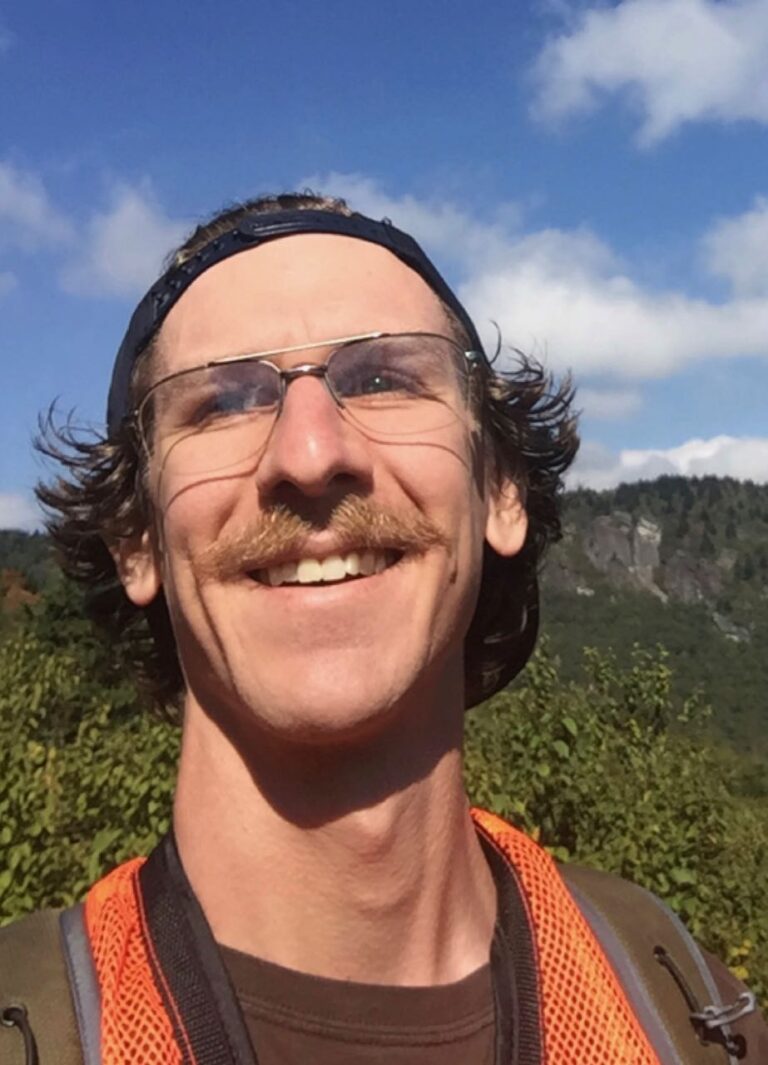 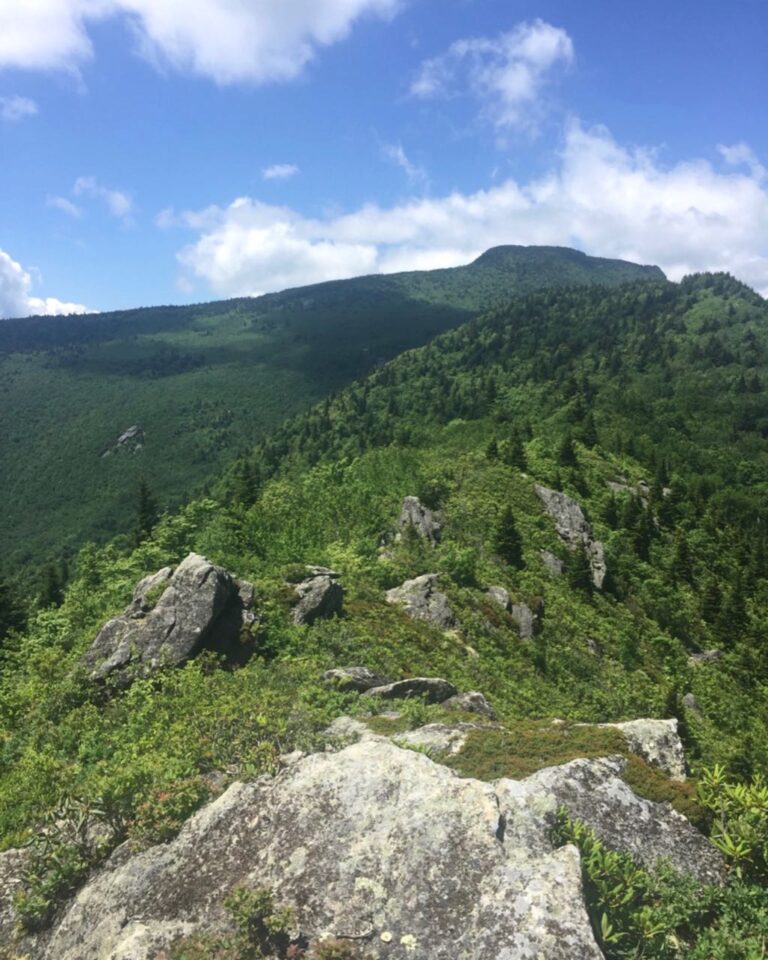