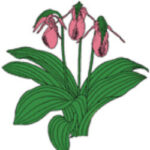 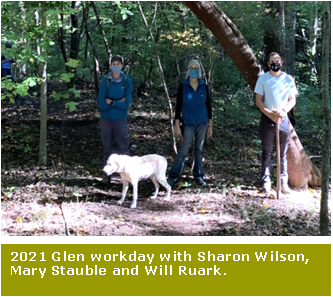 AS A CATAWBA Wildflower Glen (CWG) volunteer steward the past 10 years, I hike the property every month or two, help monitor, take photos, lead hikes and organize workdays. Throughout the pandemic, the CWG has been a source of peace for our family… a beautiful place to hike and release the stress of being housebound. It delights in all seasons.

The CWG is a jewel of biodiversity just below Mountain Island Lake and one of the most botanically diverse pieces of Mecklenburg County, just northwest of downtown Charlotte. In early spring, the white flowers of native Bloodroot cover the hillsides. The list of native wildflowers goes on and on with Jack-in-the-pulpit, Catesby’s Trillium, Foamflower and Windflower. The steep, moist, north-facing slopes along a small creek draining directly into the Catawba River host a rich diversity of herbaceous and woody plant species, including some more common to the mountains like Mountain Laurel, Horsesugar, Turtlehead and Common Silverbell. Due to the sensitive nature of the site, it is open only with
permission.

of people moved to protect the environment. Catawba Lands Conservancy (CLC) purchased this property in 1995, their first land acquisition and a priceless gift to ourselves and future generations. “It is an old-growth type forest – what botanists refer to as a climax stage of forest succession. Its distinctive layered growth consists of canopies and sub-canopies of trees, understory of shrubs and a forest floor rich in herb growth now rare in this part of the Piedmont,” said Roy Alexander, a founding CLC board member who took the CWG under his wing in the early years.

CWG’s original purchase was a “10-acre fragment so outstanding in the number of rare and different species of plant life that the two botanists (Dr. Jim Matthews and Dr. Larry Mellichamp) who inventoried it immediately pledged $1,000 toward its purchase,” states CLC literature. The CWG now contains over 19 acres of purchased land and additional 23.8 acres in a conservation easement to buffer the property.

I’ve discovered that conserved properties like this one need protection. Just buying the land is not enough. The parcels are at risk from poachers, trespassers, invasive plants and now climate change. Sharon Wilson has been the CLC Land Stewardship Director since 2005 with a staff of three staff, but with over 17,000 acres now conserved, volunteers are critical.

As documented in the National Climate Assessment, rain events have become more extreme due to a changing climate, with large volumes of rain coming in a short period of time. During rain events, the small, gentle creek on site is transformed to a rushing stream, causing erosion and undermining the entrance boardwalk and gathering area built over the stream.

Current plans include redesign of the entrance trail with a large section of boardwalk over the creek removed and the area replanted with native plants. It is a delicate site and will require workers sensitive to this. CLC needs funding, in-kind-donations and volunteers to make it a reality.

It is a privilege to get to know such a beautiful place. I think of its long botanical history and all the people that have worked to protect it. People who love the land. I enjoy sharing it with others and helping them appreciate its biological riches. More people need to understand and be inspired by our connection to the natural world. Native Americans had it right: “The Earth does not belong to man; man belongs to the Earth.” Join me in spreading this message of conservation and stewardship to the next generation.

I recently asked Dr. Mellichamp, “Do we have a chance to protect these special places?” He said we have to try harder.

Make a difference by volunteering with Catawba Lands Conservancy, or a land trust near you. Look on their website for programs and opportunities to visit the Catawba Wildflower Glen. 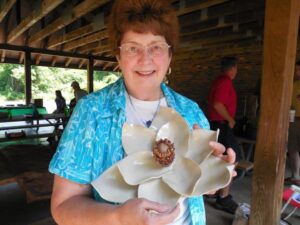 Jean is an botanist with years of experience in the computer field. She enjoys messing around with bits and bytes.

NextA challenge for our PlanetNext